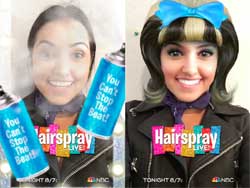 A key commercial use case for Social TV – viewers interacting with and about TV content via social networks – was social networks effectively promoting TV shows and driving tune-in to boost ratings.

If a social network proves it can drive tune-in, TV networks are likely to allocate some of their marketing spend to promote their shows on it. Targeting such TV ad budgets, Snapchat is refining its own data analysis. It aims to discover whether its users intend to watch a television show advertised via the app and also whether they actually do so.

Early results are encouraging, according to data for a Snapchat ad campaign run by NBC for its Hairspray TV musical. NBC says there was a 122% increase in viewing, according to self-reported data gathered from a viewer survey run within Snapchat.

The Nielsen ratings company and Snapchat collaborated on an in-app poll. This asked users who saw NBC’s Snapchat ads for Hairspray if they subsequently watched the live TV broadcast of the musical.

Users who saw NBC’s ads, including a selfie filter (pictured), between three to five times confirmed the 155% increase in viewing. NBC noted that watching even just the first two seconds of a Snapchat video ad doubled the self-reported viewing. The network said that the campaign as a whole had a significant reach for the valuable Millennial age group.

If the results can be replicated for future ad campaigns, this opens the way for Snapchat to support its TV content partners for their conventional broadcast television business, as well as providing them with distribution to mobile TV viewers via Snapchat Discover.