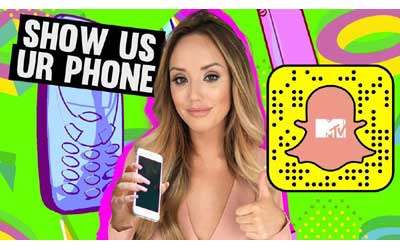 MTV International is launching a slate of original shows exclusively on Snapchat, before they can be seen on television.

The youth broadcaster is embarking on a radical Snapchat-first Social TV strategy to engage viewers via their mobiles. The move comes just as National Geographic has revealed that its Snapchat Discover content is a key revenue driver. See Futurescape’s comprehensive analysis in our latest report, The Snapchat Report.

MTV has already premiered the first of the new series via its Snapchat Discover channel. Show Us Ur Phone is a weekly game show which challenges couples in the street to say what is on their partner’s mobile and win a cash prize. It is hosted by Charlotte Crosby, a star of Geordie Shore, the long-running British spinoff of MTV’s US reality series Jersey Shore. The show is being promoted via Twitter, with the hashtag #SUUP.

Other productions to be launched on Snapchat include sex advice show MTV Sex Squad, which debuts in October, and MTV Threads, which covers musicians’ fashions. Each show is being made with between eight and 10 episodes, and episodes run for three to five minutes.

MTV’s Snapchat-first strategy fits into a wider partnership between the broadcaster’s parent company Viacom and Snapchat. Under the deal, Snapchat hosts television-style Discover channels for Viacom’s MTV and Comedy Central. The Viacom advertising sales team has the right to sell advertising opportunities on Snapchat and Viacom content.