Older media brands are succeeding in attracting Snapchat’s younger Millennial users to view their innovative content, which is made specifically for the social network.

American Millennials ages 13-24 say they usually view well-established media brands on the Snapchat Discover distribution platform rather than media which targets their generation.

The counterintuitive findings, from a survey of 1,117 US Snapchat users conducted for Variety magazine, will reassure major media owners that their brands and content continue to be relevant to teen and young adult audiences on the fast-growing mobile social network.

The results are all the more surprising given that Snapchat distributes a variety of challenger media brands which target the Millennial demographic. Yet it is these which are at the bottom of the viewing rankings.

The one significant exception is Millennials news publisher BuzzFeed, which leads the rankings with 54% of respondents saying they usually view its Discover stories.

There is then a notable drop between National Geographic (20%) and the next traditional brand, the Daily Mail (14%). The British-based Daily Mail may take comfort from its high profile in the UK, a country which was not included in the survey, but which is Snapchat’s second-biggest market. 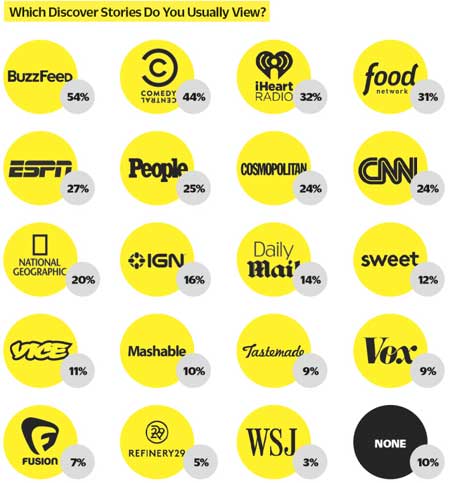 The leading traditional publishers have not just relied on name recognition and consumer loyalty to their media brands. They have also been quick to innovate and create content specifically for Snapchat and mobile consumption.

Comedy Central, for instance, has launched half-a-dozen comedy shows which are exclusive to Snapchat.

Other publishers have moved fast to embrace new formats, such as vertical video, which are crafted to suit the mobile viewing experience. Cosmo typically produces up to a dozen content items daily.

This specialist production often requires a dedicated editorial team. Some publishers have recruited up to a dozen staff who focus only on Snapchat.

By contrast, some early Discover partners chose only to repurpose existing content. Warner Music Group, for instance, showed music videos. The failure of this approach resulted in the WMG Discover channel being dropped after the initial six month deal with Snapchat ended.

While the leading media owners will be pleased with the findings, the opposite is true for the startup media brands which specifically target Millennials, but are being much less viewed on Snapchat.

These include news publishers Vice (11%), Vox (9%) and the ABC/Disney-Univision joint-venture Fusion (7%).

Also in the lower tier are women’s interest titles Sweet (12%), which is a partnership between Hearst and Snapchat itself, and Refinery29 (5%).

The remainder of the publishers are niche interest specialists which might anyway expect to have a lower viewership, including games site IGN (16%), tech site Mashable (10%) and The Wall Street Journal (3%).

However, there is a particularly stark contrast between the food interest publishers, where Food Network (31%) comprehensively beats newcomer Tastemade (9%).

A consolation for the newer media brands is that Snapchat at least gives them visibility to Millennials. The survey also found that more than half of respondents had first heard of Mashable, Vox, Tastemade and Fusion on Discover.

One caveat for the findings is that the February 2016 survey was carried out one month after The Wall Street Journal joined Snapchat Discover. Many respondents might not yet have been aware of the Journal’s debut on the platform.

Video news startup NowThis joined Discover in March, too late to be included in the survey.