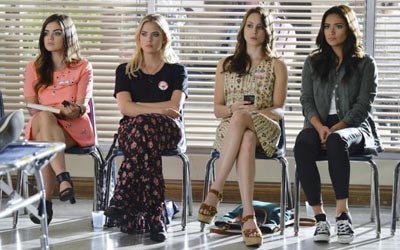 As we predicted, Pretty Little Liars has attracted more than 1 MILLION (1.06m) Snapchat followers in time for the start of its summer 2015 season on June 2nd. The show’s Snapchat account was opened only six months ago.

As well as Snapchat, the drama is a Social TV hit on other major social networks.

For the season premiere, a Twitter audience of 3.8 million people saw over 426,000 tweets by more than 153,000 unique authors, generating over 19.9 million impressions.

The show now has 2.8 million Twitter followers and since its June 2010 series debut, it has accumulated over 110 million tweets.

On Instagram, it is the most-followed scripted series with over 2.6 million followers.

Teen drama Pretty Little Liars is on track to reach one million followers on mobile social app Snapchat by the summer.

The series instantly became one of Snapchat’s fastest-growing TV brands as soon as it launched an official account on January 5, to coincide with the winter premiere of Season 5.

The account (username PLL) had skyrocketing growth, gaining a remarkable 400,000 followers in only its first 24 hours, with another 100,000 Snapchatters following in the next two weeks.

The show now has 667,000 followers and its growth rate means it is forecast to reach one million followers in time for the start of season 6, in the summer.

Snapchat is ideal for driving tune-in

The Snapchat platform enables the Pretty Little Liars social media team to reach all their followers in real time, which is perfect for reminding them to tune in for the latest episode.

“We can use Snapchat to send out a snap to 500,000 superfans 10 seconds before the show starts, reminding them that a new episode is about to begin. There aren’t many other vehicles you can use for that instantaneous conversation.”

Why are TV shows and broadcasters partnering with Snapchat?

Pretty Little Liars is just one of the TV sector leaders at engaging with viewers through the Snapchat app.

Discover enables television companies to create channels through which they can show multimedia and video stories, which are sent out on a regular schedule, just like broadcast TV.

Global broadcasters which have set up Discover channels include CNN, MTV and ESPN.